Hello everyone! I've made a midpiece for the Uni v2 that can be printed. You can find the stl file here: https://github.com/petercpark/uni-case/raw/main/midpiece/Files/midpiece-promicro.stl. Here is how it looks: 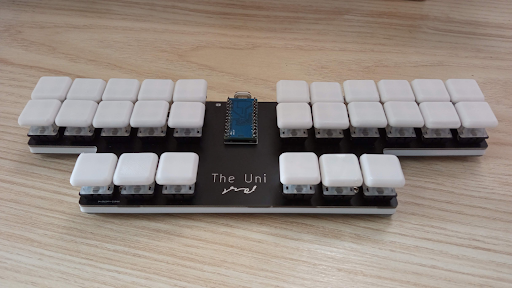 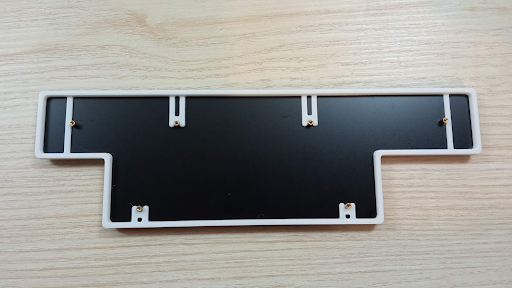 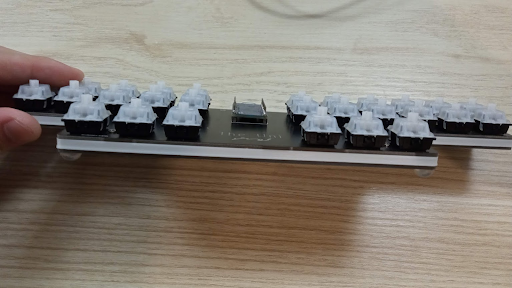 Popular posts from this blog

Steno In a Nutshell

April 27, 2021
Quick, read this sentence out loud. Now, try to type that same sentence. Which was faster? Most people can read much faster than they can type. Stenographers, on the other hand, can type as fast as you read! But what is steno anyways? Sometimes, steno feels like magic. Words. Entire words, magically appearing on the screen. Steno is a method of writing that allows the user to press multiple keys at the same time to make an entire word. Here's a video of me doing stenography. Huh? Watch it again. Maybe you can understand it the second time around. Or maybe not. Still confused? I was too. But it turns out, it's not as complicated as it looks. Steno might look like playing a piano, and you're not wrong... Piano and steno are actually quite similar. Both use chords to represent sounds. Phonetic Spelling You write in steno by typing words as they sound. You spell "cat" by typing "KAT" in steno. There are only 22 letter keys on the steno layout even though the
Post a Comment
Read more >>

April 22, 2021
How to Build Your Own Uni Step 1: Buy a PCB Go to  StenoKeyboard.com  and buy yourself a PCB. Cool. You are done with this step. Step 2: Buy the other parts You need to buy these components: Pro Micro (or Pro Micro compatible Elite C) 28 PCB Mount* Switches (Mx, Alps, or Choc) 28  Keycaps  (You can also buy keycaps from other vendors) 4 Rubber Feet Solder and Soldering Iron USB Cable to connect your Uni to the computer *PCB mount switches have two additional plastic legs that makes it easier for the switches to stay on the PCB while you solder. Plate mount can work, but it will be harder. Alps switches are plate mount. Step 3: Solder the Pro-Micro Make sure to position the Pro-Micro on the side of the board WITHOUT diodes. It is also extremely important that you solder the pro micro on so that the smooth of the pro micro is facing up so that the footprints match up. The long pins face the pro micro wh
Post a Comment
Read more >>

Steno with the Uni: How to connect it with Plover.

May 04, 2021
Thanks for purchasing the Uni! This is the layout: If you bought the PCB version click  here  for the build guide. Everything below is for those who ordered the fully assembled version. Fully Assembled Setup The fully assembled Uni will come ready to use out of the box. Almost. You just need to have Plover installed on your computer. Make sure to get the latest build. How to install Plover  : Click on the latest version of Plover (continuous 4.0.0 or whatever is newest). Under Assets install the Windows Installer (or macOS or Linux depending on your operating system). Go through the installation setup If you already have Plover installed do this: Open Plover. Click the Configure gear icon on the top left corner. Click on the Machine tab. Click on the drop down next to Machine: and select Gemini PR Below, click on the button that says Scan. Click on the drop down for Port and select the COM number that popped up. If more than one number shows up, use guess and check to find out which
Post a Comment
Read more >>